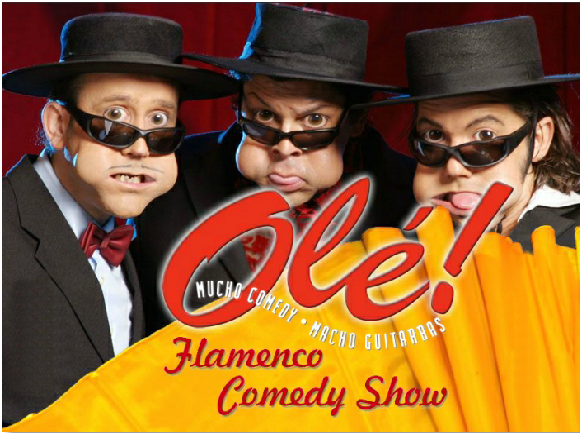 In 1990, He created a new show called “Paul Morocco and the EC Big Band”. Collaborating with Bill Bailey and Alessandro Bernardi. They performed at the London Mime Festival. With his new manager, Glynnis Henderson, and the combined talents of Alessandro Bernardi and Antonio Forcione, he formed the Olé! show, where they won the British Gas Awards and the Scottsman Best New Comers Award at the 1991 Edinburgh Festival.

In 1993, Olé! performed for “Just For Laughs” in Montreal, as well as the Adelaide, and Melbourne Comedy festivals. In 1995 in his first TV Sitcom, he played a deaf and dumb character in the “Asylum” for Paramount Television.

In 1996, Guillermo de Endaya, the longest surviving Olé member, joined the show. The following year Marcial Heredia joined Olé!. They performed with Ramon Ruiz and Anita La Maltesa in a five person show. where they performed throughout Italy in theatres and television including: Maurizio Constanzo, Bueno Dominica, Aldo, Giaccomo, and Giovanni, National Theater in Milan. Paul, Guillermo, and Marcial performed together for eight years.

In 2006, Paul and Michael Hilleckenbach produced the third show also called, “Lost Locos”, composed of two previous Olé! artists: Marcial Heredia, and Alessandro Bernardi, and the newest member, Gian Sessagari. “The future is greater than the past”, It’s not just a show, it’s a philosophy, this journey continues!

Thanks to all the artists who have contributed ideas, spirit, and joy.

Please check out the promo video below…